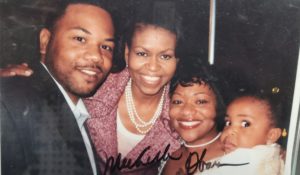 Ok, tell me I am not the only one that thinks of Michelle Obama as my BFF in my head.

I can picture us shopping together in Target or working out at the gym or maybe even having a double date night with her and Barack.  That would just be so cool.

But I did get a chance to spend some time with her back in 2007 and 2008.  While then Senator Barack Obama was campaigning, he and Michelle made it to South Carolina several times and I had the privilege to spend a good bit of time with them.

On the day before the South Carolina primary, I was one of the hosts for a Women for Obama event at Benedict College’s Business Development Center. Michelle was the speaker for that event I was honored to be the one who introduced her that day.

At the time my mini me was only 2 years old, and although she has no idea who Barack and Michelle Obama were, I wanted her to be a part of history, so I picked her up from daycare early and brought her with me to the event.

I remember we were waiting on Michelle to arrive, so I was asked to go in and speak to the ladies about the importance of this election and how we needed everyone to get out to vote.  While I was speaking, I left my baby in the holding room with one of the other hosts and when I came back out into the hallway, what did I see?  Michelle Obama was holding my baby.  It was such an exciting cite.

After Michelle addressed the crowd, we had the opportunity to go back into the holding room and talk.  I remember it like it was yesterday.  Although it really wasn’t a long time, we had the opportunity to talk about motherhood, raising children while being in political life and partnership in marriage.  She told me how supportive her mom, Mrs. Robinson was and that although it was tough to be on the campaign trial so much and be away from her girls, having a good support system was key to success as a working mom.

I remember asking her if she was ever hesitant about her husband running for President, especially with small children. Michelle was so genuine and transparent.  She shared with me that her girls (then ages 9 and 6 at that time) were the most important thing to her and her husband and that making this country and world a better place for them was why they needed to be part of the solution.  She told me that balance was a myth and I should chart my own path. (that is why I cracked up when I heard her say on the #Becoming tour that the “Lean in @$*& doesn’t work)

I think of that conversation often.  I think that was the beginning of my work life integration journey.  I took Michelle’s advice and charted my own path.

Are you charting your own path?  Are you “living your best life” unapologetically and on your own terms?    Are you using your family and other obligations as an excuse not to pursue your dreams or use them as motivation to keep pushing?

As you begin your new year, think about how you chart your own path.  Include in your resolutions/goals prioritizing yourself and your goals.  Recognize that your family is the reason why you should take bold moves and step out on faith.

Your dreams and your family are worth it.